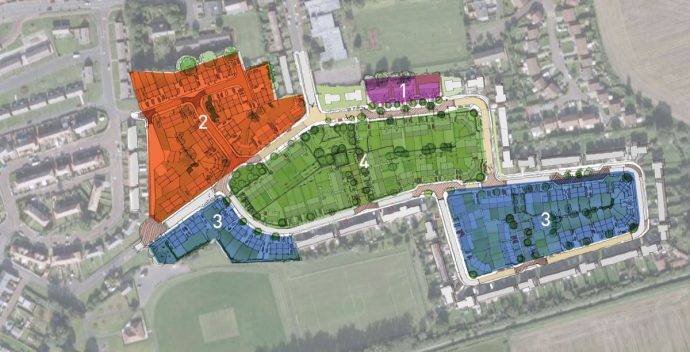 The Gateshead Housing Company has announced plans for almost 100 new rented homes to be built in the borough.

A number of prefabricated ‘Airey’ properties in Kibblesworth, Birtley, which were built after the Second World War, are set to be demolished.

In their place, 94 new rentable properties and an additional number of homes for sale will be built at the site for Keelman Homes – a newly formed subsidiary of The Gateshead Housing Company.

Local residents have been extensively involved in a number of plans for homes in the area, and had representatives on the panel that recently chose Keepmoat as the constructor for the work.

Bill Fullen, Chief Executive of The Gateshead Housing Company, said: “We have already made improvements to thousands of homes across Gateshead, with just one in eight now needing any works completed.

“As well as updating existing homes, we are also looking at a number of plans to build new homes in the borough.

“This first new build scheme at Kibblesworth will provide homes of all sizes for rent, and we are delighted to be working with local residents and Keepmoat on these exciting plans.”

The housing company hopes to receive a decision regarding the planning application early next year and work on the estate could then begin in March 2010.

This website uses cookies to improve your experience while you navigate through the website. Out of these, the cookies that are categorized as necessary are stored on your browser as they are essential for the working of basic functionalities of the website. We also use third-party cookies that help us analyze and understand how you use this website. These cookies will be stored in your browser only with your consent. You also have the option to opt-out of these cookies. But opting out of some of these cookies may affect your browsing experience.
Necessary Always Enabled

Any cookies that may not be particularly necessary for the website to function and is used specifically to collect user personal data via analytics, ads, other embedded contents are termed as non-necessary cookies. It is mandatory to procure user consent prior to running these cookies on your website.