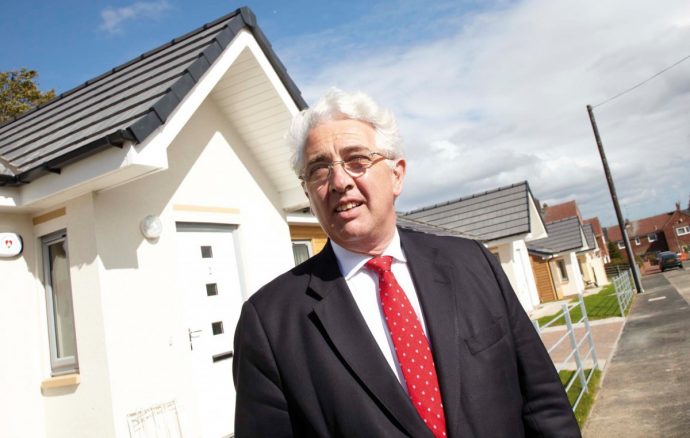 The first homes have been completed in an ambitious project which is replacing 150 outdated houses in Gateshead.

Robert Napier, Chair of the Homes and Communities Agency (HCA), visited Kibblesworth (see photo above) to view progress and meet residents in their new homes.

“This development is giving Kibblesworth a real lift, replacing old prefabricated houses and providing a wider range of new ones for local people,” said Robert Napier after his visit.

“Our role is to help housing providers like The Gateshead Housing Company to make things happen in local neighbourhoods, and the Kibblesworth scheme is a great example of that approach in action.”

1940s ‘Airey’ properties at Kibblesworth have been demolished to allow Keelman Homes, a subsidiary of The Gateshead Housing Company, to build the majority of the new homes with overall site constructor Keepmoat.

The £14m scheme, which is also supported by Gateshead Council and the Homes and Communities Agency, will create 81 new affordable family houses and bungalows to rent, plus 54 more for sale.

In addition, 13 will be offered for ‘intermediate rent’ – a unique and flexible way for first-time buyers to get on the housing ladder over the next three years.

The first houses have now been completed, with older residents among the first to move into the new homes.

The Gateshead Housing Company’s Chief Executive, Bill Fullen, said:  “We have already made improvements to thousands of properties across Gateshead through our Decent Homes programme – with less than 1,500 out of almost 22,000 now needing any work.

“We were delighted to show the HCA how we are now literally building on that success, through this first scheme to bring new affordable homes to Gateshead.”

The scheme, which has been made possible by a £4.8m investment from the HCA, is also set to provide new play areas and improved landscaping for residents to enjoy.

It is one of a series of schemes supported by the Homes and Communities Agency in Gateshead, which include the development of Gateshead’s first new council properties in 25 years.