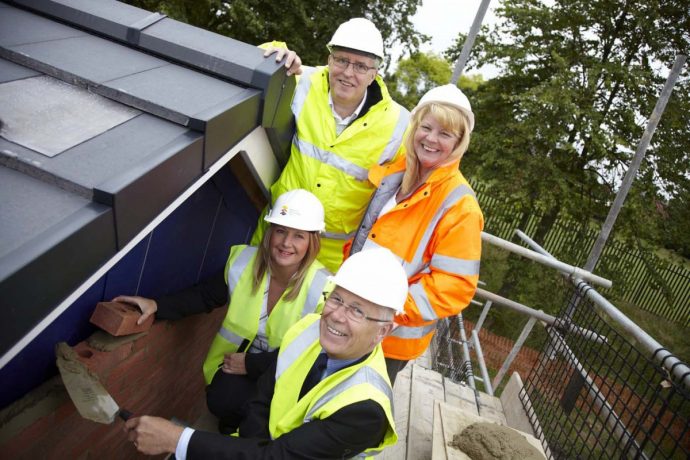 Work on almost 150 new homes in Gateshead has reached a major milestone with a topping out ceremony of the first bungalows completed on site.

Prefabricated 1940s ‘Airey’ properties at Kibblesworth have been demolished to allow Keelman Homes, a subsidiary of The Gateshead Housing Company, to build the majority of the new homes with overall site constructor Keepmoat.

The £14m scheme, which is also supported by Gateshead Council and the Homes and Communities Agency, will create 81 new affordable family homes and bungalows to rent, plus 54 additional homes for sale.

In addition, 13 homes will be offered for ‘intermediate rent’ – a unique and flexible way for first-time buyers to get on the housing ladder over the next three years.

The first homes will be fully completed in September with older residents of the estate moving in to the new homes.

Councillor Angela Douglas, Gateshead Council’s cabinet member for Housing, said: “Local councils like us have struggled for many years to match people’s housing needs with the ever-reducing supply of social housing, especially for older people who have very specific housing needs.

“We have been given the chance to replace poor quality post-war houses with new homes that will be some of the most modern and energy-efficient in the borough.”

The Gateshead Housing Company’s Chief Executive, Bill Fullen, said:  “We have already made improvements to thousands of homes across Gateshead through our Decent Homes programme – with less than one in 14 now needing any work.

“We are now literally building on our previous success, through this first scheme to bring new affordable homes to Gateshead.

“Our plans also include a range of improvements to the whole estate to include play areas and landscaping to be enjoyed for generations to come.”

Michelle Bell of the Homes and Communities Agency, said: “This scheme will make a real difference for the community in Kibblesworth.

“By providing a wider range of homes, we can make it easier for families to find a quality, energy-efficient home to meet their needs in the area.”

The £14m Kibblesworth scheme is one of a number of major projects in Gateshead to be supported by the Government’s Homes and Communities Agency (HCA), which has allocated over £12m to the borough over the past year.

The scheme has been developed by Keelman Homes – a subsidiary of The Gateshead Housing Company, with overall site constructor Keepmoat , with funding and support from Government through the Homes and Communities Agency and Gateshead Council.

Gateshead Council has contributed the land and additional financial support to enable this scheme to go ahead.

Photograph above: Brian Kelly of Keelman Homes and Michelle Bell of the Homes and Communities Agency (front) top out the first bungalows with Bill Fullen, Chief Executive of The Gateshead Housing Company and Councillor Angela Douglas.