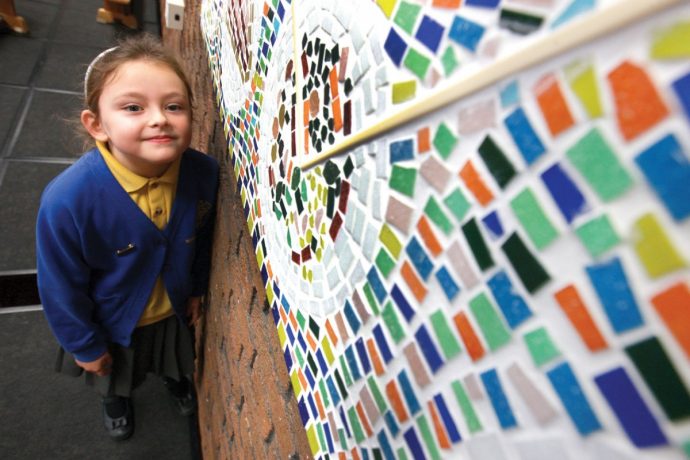 The history of Kibblesworth has been colourfully depicted through a series of mosaics, created from a community art project supported by the housing company and local councillors.

The eight panels each feature an element of the village’s heritage – from coal mining to the recently-built Millennium Centre.

Pupils from Kibblesworth Primary School, which is celebrating its 40th anniversary this year, helped create the mosaics with the school now displaying the finished mosaics.

Work began back in October, during the annual Kibblesworth Festival.

Since October, the school’s 124 pupils have been working hard to complete the history project.

They were helped by parents and teachers and visual artist Josie Taggart, who helped pupils to design the mosaics.

Head Teacher, Kevin Dodd, said: “The finished mosaics look brilliant and have been given pride of place in our school hall where they can be enjoyed by the community for years to come.”

The history project was supported by Keelman Homes, a subsidiary of The Gateshead Housing Company, local councillors and Frank Haslam Milan (FHM) North East, which is currently constructing new homes in the village.

The £14m development, which started in 2010, is replacing 1950s ‘Airey’ homes and is also being supported by Gateshead Council and the Homes and Communities Agency.

The finished mosaic panels were unveiled by the then Mayor of Gateshead, Councillor Joe Mitchinson, during a special assembly.