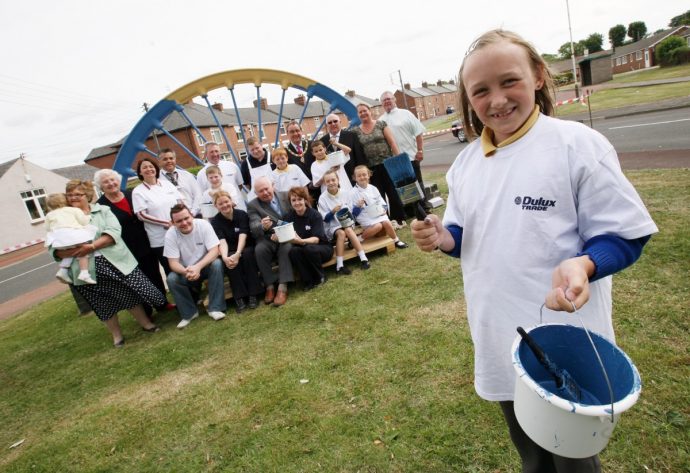 Pupils from a Gateshead school took time out of class before the summer holidays to help restore a landmark monument in their village.

Children from Kibblesworth Primary School joined staff and contractors to give a lick of paint to the village’s old miners wheel which has not been maintained since it was transported from Shildon Colliery in the 1980’s.

Kibblesworth Colliery closed as a working colliery in 1974 and the only legacy remaining of the former pit is the wheel which is located in the centre of the village.

The children, studying a ten-week arts programme as part of their studies, were nominated by their school to help staff from Frank Haslam Milan (FHM) North East, part of the Keepmoat Group and The Gateshead Housing Company.

Lamesley Parish Council is responsible for maintaining all monuments within the village and has been working with FHM and The Gateshead Housing Company to help restore the wheel.

FHM’s lead resident involvement officer, Heather Miller, said: “This is one of a number of projects we are supporting with Kibblesworth Primary School and I would like to thank all of our partners in helping to make this project happen.”