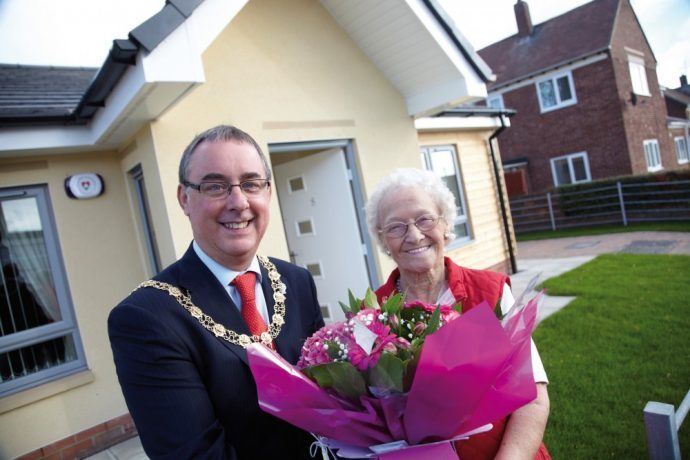 Tenants in a Gateshead village have been welcomed to their newly-built homes by a VIP guest.

The Mayor of Gateshead, Councillor Michael Hood, joined board members from Keelman Homes to visit tenants in the first of 150 new homes being built in Kibblesworth.

During the visit they got to meet one resident who had moved in to a ‘temporary’ home on the estate almost 60 years ago.

Ruth Bates-Morgan, 85, had moved in to a post-war ‘Airey’ home in 1952, which was originally built to last a couple of decades at the most.

Those homes, some 58 years later, are being demolished to allow Keelman Homes, a subsidiary of The Gateshead Housing Company, to build new homes with site constructor Keepmoat.

The Mayor of Gateshead, Councillor Michael Hood, said: “Local councils like us have struggled for many years to match people’s housing needs with the ever-reducing supply of social housing.

“This is specially so for older people who have very specific housing needs.

“We have been given the chance to replace poor quality post-war houses with these wonderful new homes that will be some of the most modern and energy-efficient in the borough.”

Tenant, Mrs Morgan, who moved from one of the first Airey homes to be built on the estate, was delighted to be welcomed to her new home by her VIP guest.

She said: “When I first moved in to the old home I was told it would only last 15 years. It was freezing in winter and already I feel so much warmer in my new lovely new bungalow, which is still close to my friends.

“I was so proud to be able to show the Mayor around my new home and offer him a cup of tea.”

The £14m scheme, which is also supported by Gateshead Council and the Homes and Communities Agency, will create 81 new affordable family homes and bungalows to rent, plus 54 additional homes for sale.

In addition, 13 homes will be offered for ‘intermediate rent’ – a unique and flexible way for first-time buyers to get on the housing ladder over the next three years.

The Gateshead Housing Company’s Chief Executive, Bill Fullen, said:  “We have already made improvements to thousands of homes through our Decent Homes programme – with less than 1,500 out of almost 22,000 now needing work done.

“We are now literally building on our previous success, through this first scheme to bring new affordable homes to Gateshead for generations to come.”

Photograph above: The Mayor of Gateshead, Councillor Michael Hood, is pictured with Ruth Bates-Morgan, one of the first tenants of homes in Kibblesworth back in 1952 and once again in 2010.